What prospects want might surprise you. Learn how to give prospects the information they need.
Menu 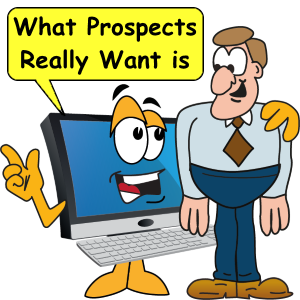 What prospects want by: Ann Sieg, "The Renegade Network Marketer" sent this marketing lesson to me, (because I joined her system). Ann has quietly been bulding MLM businesses for years and has become a phenom in the industry. I hoped that her teachings would help me to grow my own business. So far, so good.

Typically her words are right on point but this particular lesson really hits home with me. Oh my, now I have to update a lot of webpages to incorporate these ideas. Here is Ann's lesson.

I'd like to share a simple principle that can make you money hand over fist, leaving other distributors in your company dumbfounded - wondering how you consistently pull it off!

"What Prospects Want - Is Knowledge?"

It sounds simple I know, but let's delve beneath the surface and really get our hands dirty - because there's A LOT more to this question than meets the eye.

TO BE THE BEST AT SOMETHING, YOU HAVE TO LEARN FROM THE BEST

When I was struggling to sell stuff early in my MLM career, I stopped taking sales advice from my company and started getting it from real experts. The advertising pioneers... the persuasion professionals... people who had to know what they were doing because their job was to sell thousands of products BY THEMSELVES - using nothing more than words on paper.

I think you'd agree with me, I'd have to be crazy NOT to copy their wildly successful and proven advertising secrets (... strategies that had already made them millions in other industries) and use them in the MLM industry  with my own business!

The following was hands down one of the most important things I've ever learned from these marketing legends and is something I'm constantly asking myself:

"What do my prospects really want?"

Let me give you an example of what prospects want.

Women don't want cosmetics... we really want to improve our appearance, become more attractive, and maybe (hypothetically speaking here) hide a few wrinkles and imperfections while we're at it!

Plus, it is always nice to get compliments from others - especially that special someone - on how beautiful you look.

Charles Revson, the make-up mogul who created and managed Revlon for over 50 years, clearly understood what his prospects really wanted. He was once quoted saying: "In the factory we make lipstick, in our advertising we sell hope."

Let's look at another example of what prospects want. Elderly folks don't want just another bottle of arthritis pills, they really want relief from the uncomfortable pain they're always in.

And more than that, they really want to live their lives independently - without relying on someone else's help... to be able to freely move about in the garden, to be capable of keeping up with their grandkids to finally get a refreshing nights sleep!

Here's one more - it's one of my favorite examples of what prospects want!

Back in the 1800's, Daniel Webster an American statesman, was asked by a friend to auction off his farm. "Neighbors," he said, "we're not auctioning Tom Brown's 34 good milk cows... or 80 acres of fine land... or a sturdy home that's seen 20 winters.

"No," continued Daniel, "I'm offering you the chance of biting into a red apple with the juicy sap running over your lips, the smell of new mown hay, clear mountain steam water on your table, the crunch of snow under your feet... and the best neighbors in the world..."

After he was finished, bids from the townsfolk came pouring in - because Mr. Webster knew what his prospects really wanted!

So please, take some time (maybe even a couple of hours) and really ask yourself: "What Do My Prospects Want?"Be sure to scribble down everything you come up with. Don't stop until you've got at least a couple of pages of answers.

ARE YOU SURE THAT'S ALL YOU CAN THINK OF? 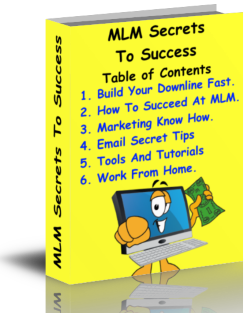 MLM Secrets To Success
If you're having trouble coming up with ideas and find yourself staring at a blank piece of paper, here are a few suggestions from master copywriter and advertising great, Victor Schwab.

Your prospects want to Have: Self-confidence, Fame, Compliments from others, Sense of accomplishment, Improved appearance and comfort (the list goes on).

Your prospects want to BE: Recognized by others, Friendly and outgoing, Stylish and fashionable, Proud of what they own, "First" in things and Influential for other people. (the list goes on)

Your prospects want to DO: Uniquely express themselves, Resist being controlled by others, Emulate the admirable, Acquire things Win the affection of others and Improve themselves. (the list goes on)

If you can combine the benefits of what you're selling with what your prospects really want, then your products will grow wings and fly off the shelves - literally!I sincerely hope this lesson turns out to be as valuable to you as it was to me.

To Your Success, Tim Koen